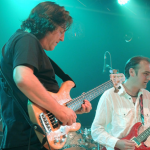 Alan Thomson Somewhere in Europe with Martin Barre! Can’t remember where. Some great shots here. Try and catch a show whilst we are on Tour. Dates are….. 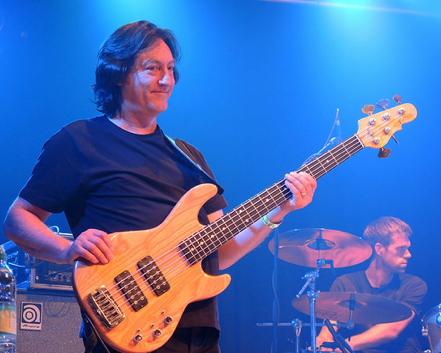 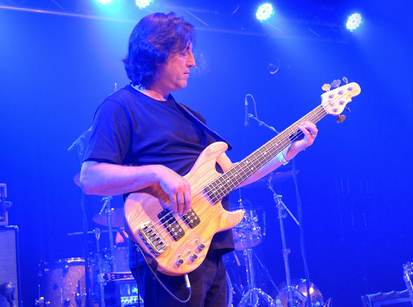 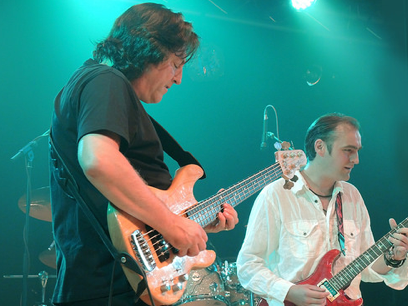 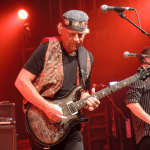 Its been a really busy past few weeks as you can probably see by the lack of News on my site! Sorry about that. I am looking forward to playing with Martin Barre and as you can see by the Photos below I’ve already played a few gigs. Its been really interesting playing those Jethro Tull numbers. Have any of you been to see any of our Shows? Come and say HELLO if you do plan to go to a GIG. The Photos were taken by Helen Robinson. Great Shots!!! 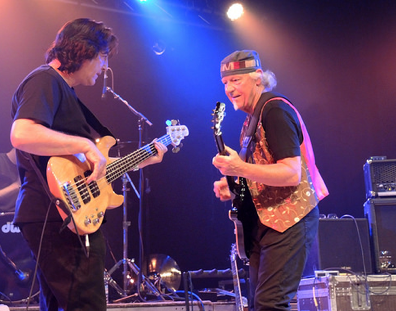 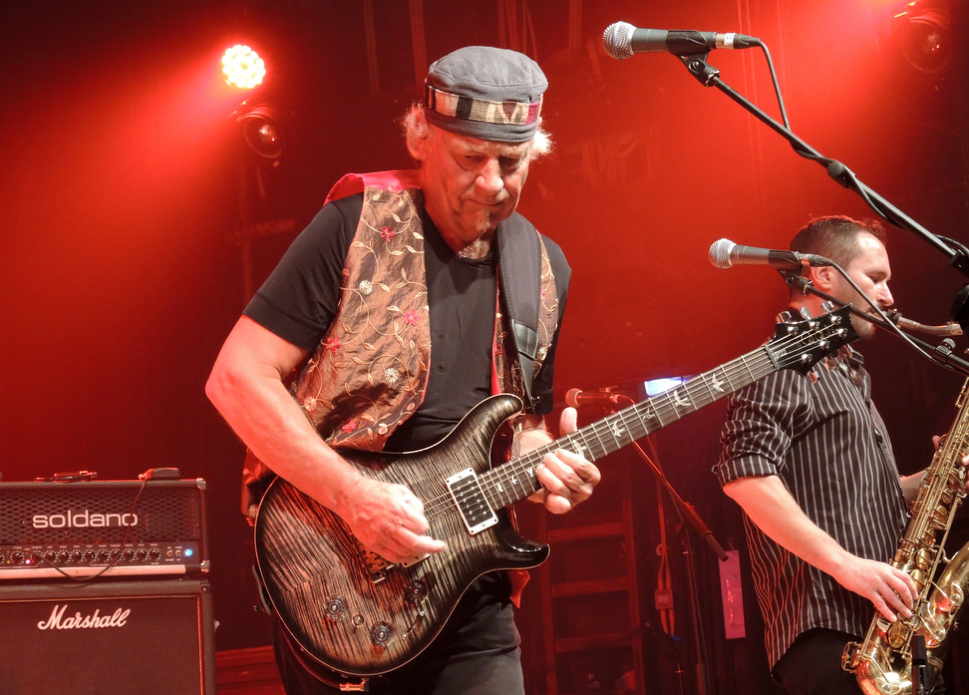 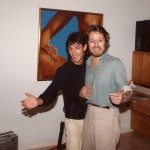 Here’s a photo of myself  (Alan Thomson) with the late Robert Palmer. You will all remember ‘Addicted To Love’!! We were recording the John Martyn Album “Sapphire” recorded at Compass Point Studios, Nassau, Bahamas and CaVa Sound Workshops, Glasgow, Scotland. Robert Palmer assisted in the later stages of the recording Happy Times! I do believe that David Mundell has a Jacket from Roberts ‘Addicted To Love Tour’ somewhere on display at the Green Hotel Kinross. 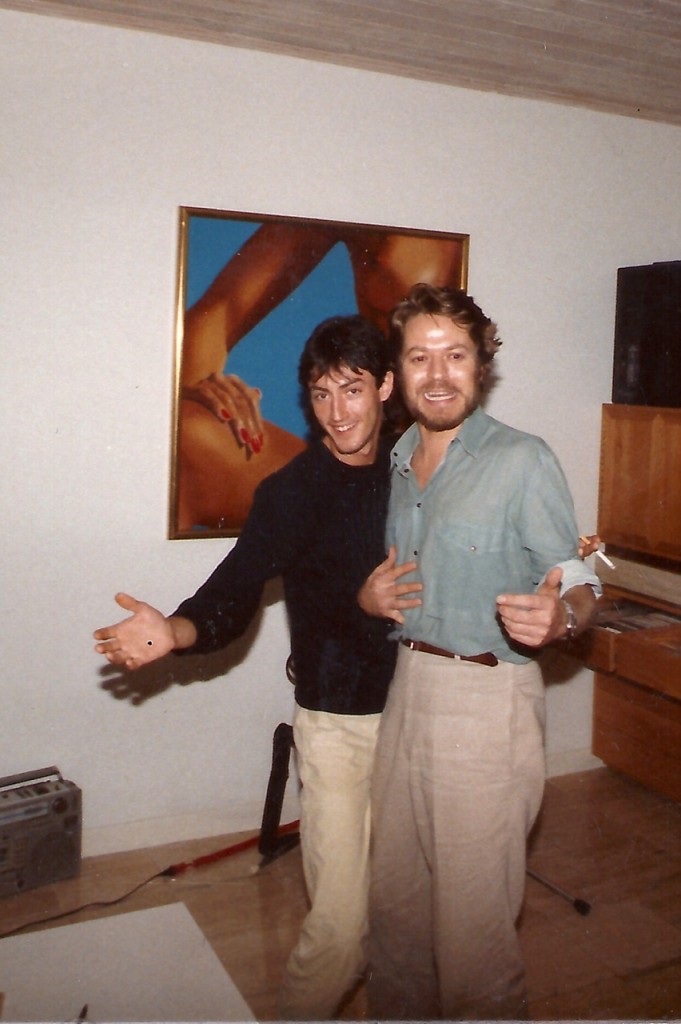 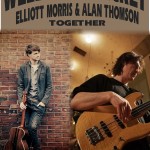 Elliott Morris is a young guitarist and singer/songwriter prominent in the Lincolnshire, UK music scene who is known for his ‘unorthodox’ style of percussive guitar. Elliott was the winner of a prestigious Danny Kyle award at Celtic Connections in 2013.

Alan Thomson came from a musical background with both his father and grandfather being jazz musicians and his mother being a fine pianist and singer. He started (like many other kids) to learn to play the violin at age 5 and then moved onto the piano until at 13 years of age, he finally got a guitar. Along with bass player Neil Fairweather, drummer Tim Brittain, and sax/flute and guitarist David Roy, “The Arthur Trout Band” was formed and played in and around Glasgow from 1976-1980 also playing in the summer of 1980 at Stonehenge and Bristol Ashton Court festivals. An occasional visitor to the band rehearsals was David’s cousin, the now legendary Scottish singer/songwriter and innovative guitarist John Martyn.
John needed a bass player for his forthcoming Grace And Danger tour of the UK. Alan borrowed a fretless bass, practiced frantically for two weeks, auditioned and got the job, a relationship which
would last almost thirty years until John’s death. Through his association with John, Alan has recorded and performed with Phil Collins, Eric Clapton, Robert Palmer (for whom he wrote the B-side of the hit Addicted to Love), David Gilmour, John Jorgenson, Linda Lewis and Bert Jansch. 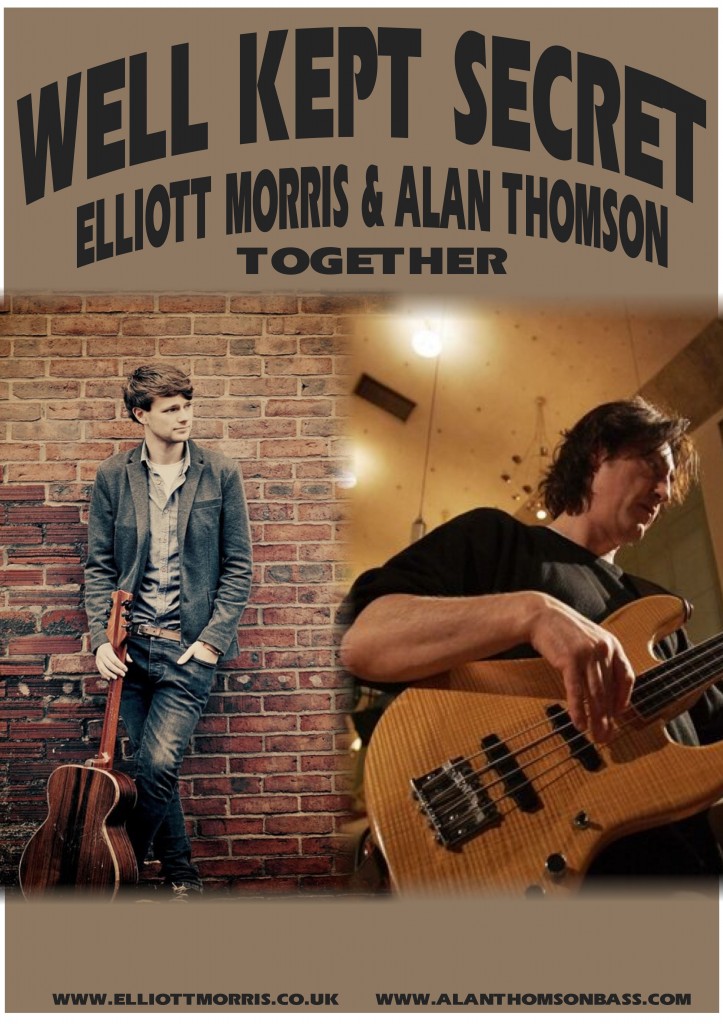 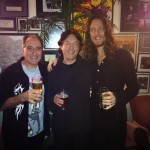 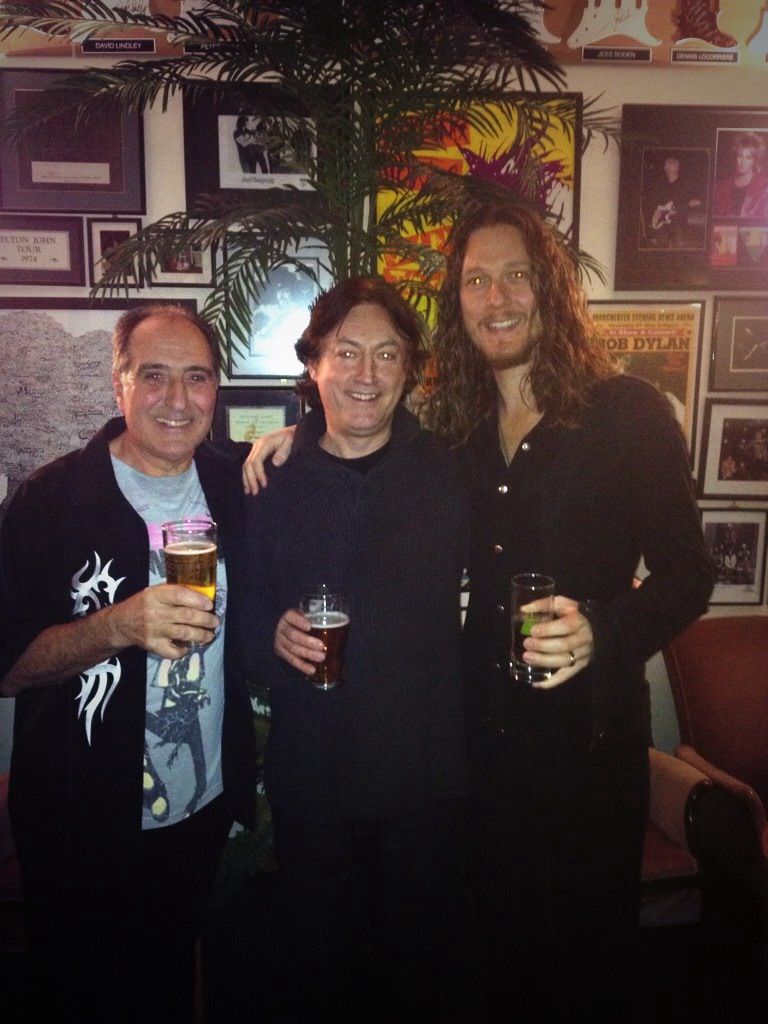 Alan Thomson, Tony Fernandez & Adam Wakeman somewhere in Scotlan. Taken when I was on another night off I managed to catch the Strawbs in Kinross. Thanks to Mundell Music  for the photo! Now what was the name of the Band all three of us were in? Anyone remember? 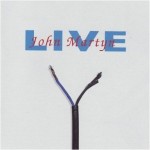 Released in 1995 having been recorded during The Apprentice tour at the Shaw Theatre, London. To support the release of The Apprentice John toured for three months in the UK and Europe, including eleven dates at London’s Shaw Theatre which featured guest artists. Pink Floyd’s David Gilmour also guested and the show at which he appeared was filmed and released on Video in August 1990.

David Gilmour features on the album. 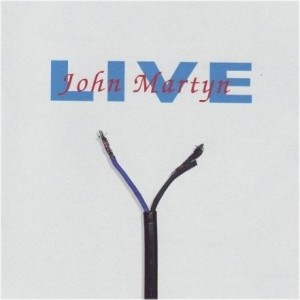 John and David Gilmour were interviewed on television and Gilmour said he had admired John’s music for a long time and even knew one or two songs ! The pair had only rehearsed for a couple of hours before going on stage and Gilmour jokingly said that John would glare at him when he got it wrong ! Another spontaneous recording. In November 1999 re-released as Dirty, Down and Live on the Griffin label. 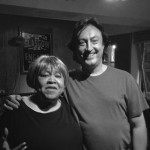 We opened with Frank O’Hagan Band for the legendary Mavis Staples last night at the ABC in Glasgow . Great gig! We got to meet her afterwards which was cool. I  played on “Goodnight Irene” with her and John Martyn many years ago but only finally got to meet her yesterday. 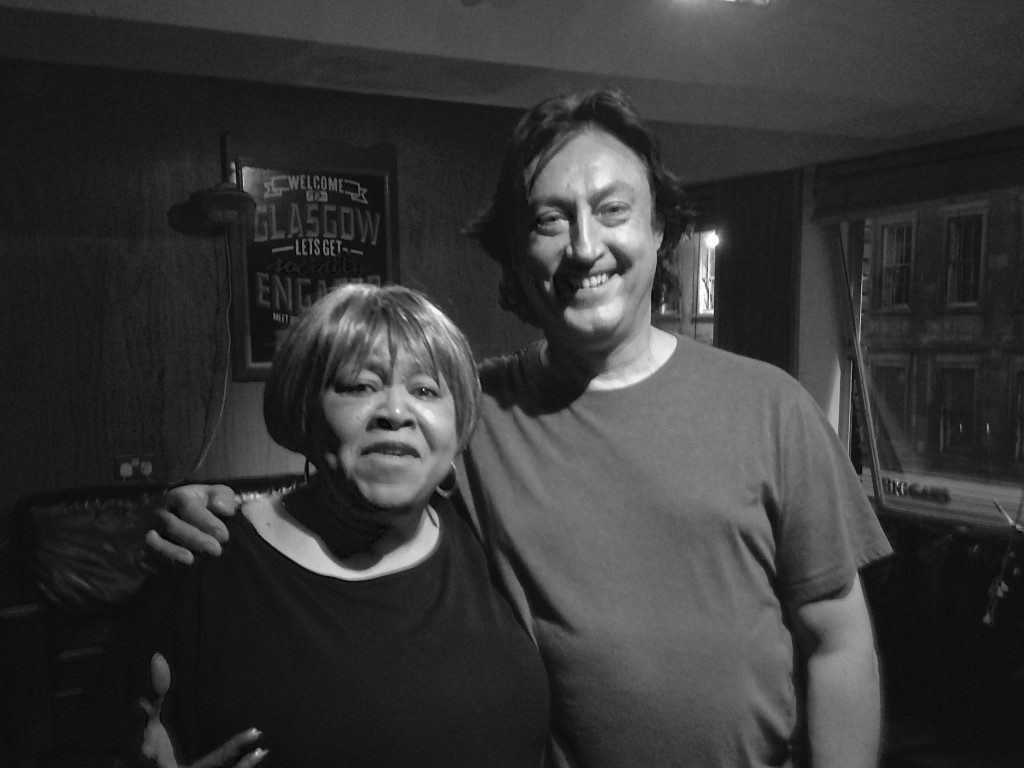 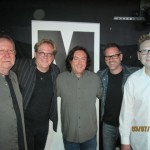 Alan Thomson with a rare night off goes to Kinross to meet John Jorgenson with his Bluegrass Band J2B2. The Band consists of John Jorgenson, Herb Pedersen, Mark Fain and Jon Randall. John Randall co wrote Whiskey Lullaby and Herb Pedersen wrote the song ‘Wait A Minute’. Mark Fain plays with loads of different Artists namely Ricky Skaggs and Bruce Hornsby. Some brilliant harmonies and a chance to meet up with some old friends. This was their very first live show ever in the UK. A Mundell Music first again! 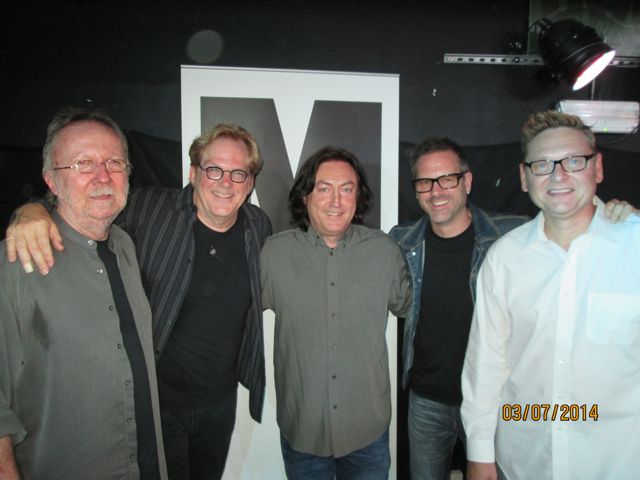 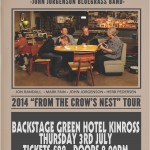 A night off so I’m off to see the John Jorgenson Bluegrass Bank in Kinross. Its their only Scottish date so I can’t miss it! Its at Backstage at the Green Hotel with Mundell Music. 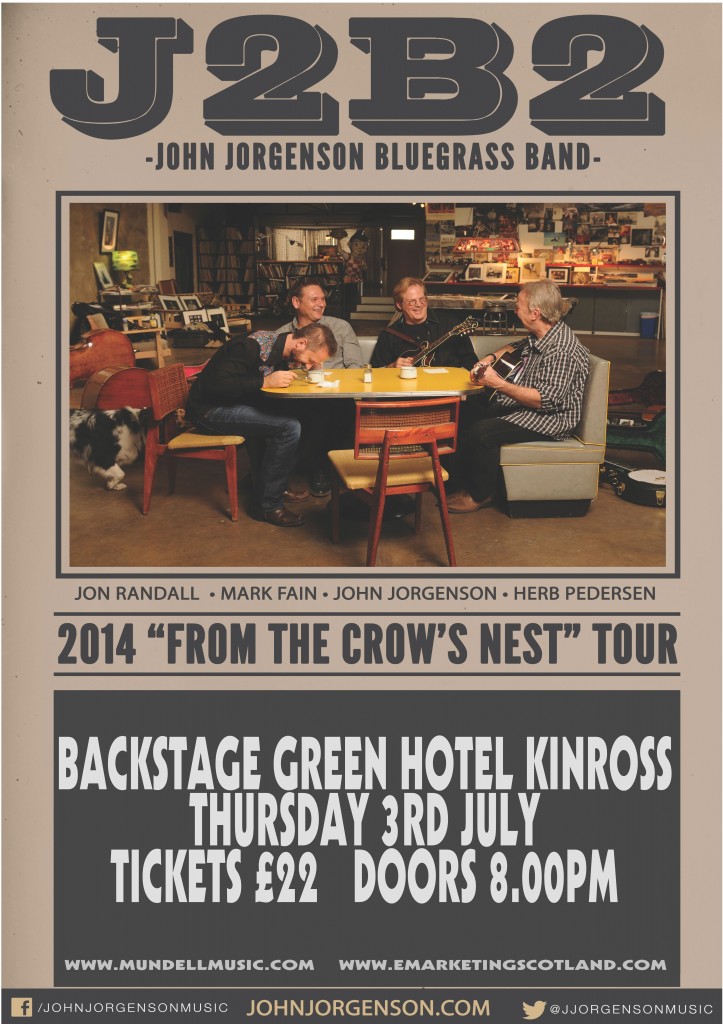 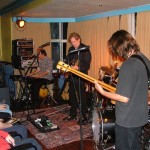 That is a Photo from a few years ago. It was at the FBI in Glenfarg where John Jorgenson would come every year. This particular trip was in 2004 and we had Jason Smith on Drums, Jeff Ross on Keyboards with myself Alan Thomson on Bass. For those of you who are not too familiar with John Jorgenson‘s Bio here is a quick look! 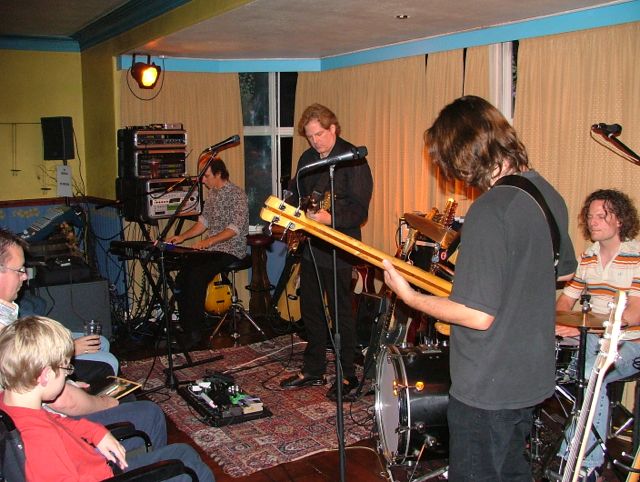 Music virtuoso John Jorgenson, known for his blistering guitar licks and mastery of a broad musical palette, has earned a reputation as a world-class musician and guitarist who has collaborated with the likes of Elton John, Luciano Pavarotti, Bonnie Raitt and Bob Dylan. In addition to acoustic and electric guitars, he is also regularly featured on the saxophone, clarinet, bouzouki, pedal steel, mandolin, vocals and has garnered recognition for contributing to numerous platinum-selling and GRAMMY-winning albums.